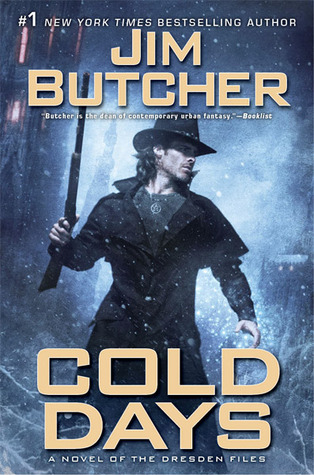 Cold Days is right. Harry has come back from the dead to step into the shoes of the Winter Knight. He tried to have himself killed all so he could avoid being the Knight. Now he is trapped fighting urges and violent tendencies while trying to keep his sanity. After months of recovery the Winter Queen Mad has his first job ready and waiting. Harry is to kill Mab's daughter, and oh by the way, she is an immortal. How on Earth can this task get any more difficult. Oh wait, in true Jim Butcher style there is yet another twist. The island that Harry can draw power from known as Demon reach is on the verge of exploding and taking out all of Chicago and neighboring areas.

This is the book I have been waiting for since Harry's demise. I know in the last book he was back with the gang and all but it wasn't the same. Having Harry slowly get back together with all his friends and regulars in the series was a lot of fun, Reading a Dresden book is like visiting with friends who have more issues than you do. Harry has a lot on his plate as usual which makes this easy to get into and remain interested.

So let's stack this up. Harry has to kill the Winter Lady, daughter of the woman he reports to. He has to save his island from releasing all kinds of demons and destroying a city and hundreds of lives. On top of that he has to reconnect with those he left behind when he chose to be killed to avoid being the Winter Knight. Harry has a daughter he desperately wants to see but can't put her through the pain of having a father who is a wizard. Harry has to control his urges to kill and screw anything that walks from the power of the Winter court while he loves his best friend yet can't do anything about it. A single character cannot get more downtrodden and still get back up to save a city than Harry Dresden. This poor man has everything against him and he still finds a way to be the hero.

I loved this book. I feel like there is so much I want to say about how wonderful this book is and I just can't form the right words. I have to be forgetting something and I'm only part sure that this makes sense. I feel as if I have been a little generous with the 5 star ratings this year, but the more I think and reflect on what I have read this year, so far. The more I realize I have just found some great reads for me. This is my favorite book in the series so far. I know I have said this in the past and there will probably one I like better in the future, but for now. This one is my favorite for now. 5 out of 5 stars. I can easily see why this was the Goodreads choice winner for Paranormal Fantasy in 2013.
Sci-Fi