The Walking Dead Vol 25: No Turning Back by Robert Kirkman 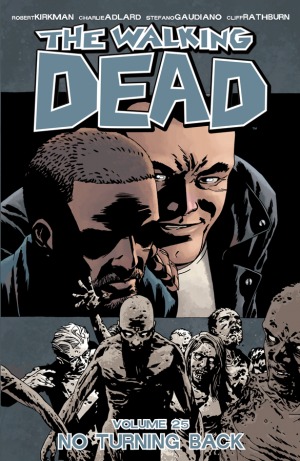 So here is your warning up front. If you haven't read this series this review is going to contain spoilers the will spoil previous books. My review, however, will not spoil this book. Let's kick this off right were the last book ended. Rick and the gang are trying to cope with the fact that Alpha and her group severed the heads of several of the Rick's group. Now here is something I didn't think of, the heads were zombie alive. It makes sense that if you don't damage the brain the heads could still be animated without the bodies. Very cleaver of Mr Krikman to think about that and then force those characters to fight their emotions and kill all their friends' heads.

Another thing I want to mention is that this is a calm before the storm volume. The big action was in the last book and this is the aftermath leading up to more. I mean the next book is called Call to Arms. Sometimes these types of volumes can be dull and seem pointless. This one wasn't at all. There are so many little gems in this book that as a fan of these characters who has spent years with them both on the show and in the comics I really enjoyed the little bits in this book. There a scene with Rick and Negan that was both enjoyable and frustrating. We get an interaction with Andrea and Carl and his new girl friend. Actually there are 2 great scenes with these three that was just great.

Tensions are running high in this book because all those that have lost love ones, even Eugene, want revenge and blood and they want it now. It is becoming tough for Rick to keep control so that they don't do something stupid. It almost feels like Rick is loosing his leadership hold on the group. What is Rick going to do to get pay back? How is he going to get a hold on the group again and win back their trust? These questions and more are in this book and I would recommend this as a read but you would have to read the whole series first and those that read the series will read this anyway. So let's skip to the rating. 4 out of 5 stars. Well more like 4.5 stars.
Graphic Novel Horror Zombie