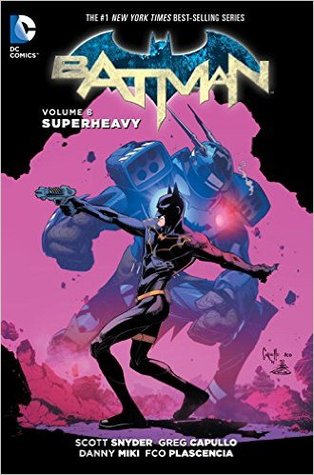 If you haven't read the previous volumes and would like to find out what happens on your own, this is your SPOILER WARNING.

What the F@#$ is going on?!?!?! I knew there was going to be fall out from Bruce and the Joker being crushed under the cave in at the end of Vol 7 but this was not at all what I expected. Bruce is safe but has lost everything that makes him Batman. He has this beard that just looks odd on him. The city needs a Batman so a secret military like group constructs a mechanical batman suit that looked more like the 80's robot that delivered drinks. Who is in this suit being the new Batman

I'm so lost at this point. I'm not sure how Bruce survived the cave in and then what happened to Joker? That wasn't addressed in this book at all. Scott Snyder is an amazing writer and I hope he has a way to bring this all back to normal before his run on the series ends. Now the new Batman. There is a man in the suit and he wears a costume that reminds me of Batgirl's when it was Cassandra in it when Barbra was Oracle. Gotham's very own Jim Gordon is in the mechanical bat suit. Still not a fan of killing this Batman does carry a gun and that bugs me. From what elese I am reading the Bat Family isn't to fond of the new Batman either but they don't know it is Gordon in the suit.

The story was good enough that I can't wait to get to the next book but at the same time I am really disappointed in Scott Snyder. I just hope that the rest of this story line explains all the holes and really blows this book out of the water. I really don;t have much else to say about this book other than I give it 2 out of 5 stars.
Graphic Novel