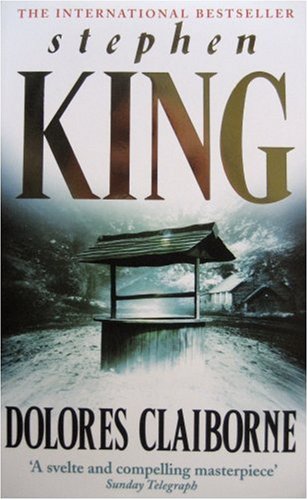 So I am on a mission to read every Stephen King book I can. I finally got around to reading this book and I must say it was just weird. This book opens with a sweet old lady telling a story. She is under arrest and complementing the officers and saying they are fine young men who she remembers running around in soggy diapers. So it is odd that this sweet old lady is being read her rights and telling a story like it is bingo night. Then Dolores says she didn't kill that bitch but if they want to lock her up for killing her husband that's fine. I was floored and when I thought it couldn't get weirder good old Dolores asks for something to drink and says "Thanks Honey Bunch" to the officer. I had to laugh.

That is kind of where the fun drops off. This book is exactly like talking to a Grandparent who rambles on telling a story but never really gets to the point. My Grandparents are great so I haven't really had this type of situation but everyone knows what I'm talking about. This book easily could have been a short story in a collection and it would have been a little better. The story just dragged on and on at times yet I couldn't stop myself from listening.

You know right up front that Dolores didn't kill her boss but she did kill her bastard of a husband. We get to learn everything that leads up to why she wanted to kill her husband and why she called her boss such a bitch. I think knowing exactly how everything is made me want to find out how she killed her husband and even though we know Dolores's boss is dead and they think she killed her we have no idea what exactly happens. I had plenty of time to listen to this book so I got through it very quickly.

I went up and down and up and down about this book and just how to review it. For most of the book I was rolling my eyes and just wanting Dolores to get to the point. However, as time passes since I finished this I tend to think more on it. When I finished the book I was thinking about a 2 star rating. Now that I have had some time to think on the book I am more middle of the road and this is a 3 out of 5 stars read. Not spectacular but I did enjoy this book. Still, I have read it and it won't be on my re-read list. Glad I read it though.
General Fiction