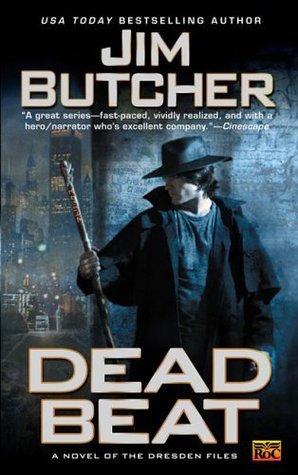 I'm going to be so bummed when I catch up in this series. I love this series and this book was great. Unlike most of the other books there is really only one plot line here. The Queen of the Black court of Vampires has threatened to harm the people Harry cares about unless he finds her the book of one of the most powerful Necromancers. Harry not only has to find this and give it to her but also get this done before Halloween night when it is easier to raise the dead.

I will admit that this book is a little slower getting started but the characters in this book are the best part. Slight spoiler if you haven't been reading these but I really like that Harry has a half brother. Thomas is a great addition to the story and I like the relationship that is budding between these brothers. I have really missed the character Michael so this is a good change of pace. We also get to see a lot more out of my favorite hermit medical examiner Butters. By the end of this book I loved Butters character.

The last book was starting to pull away from what I really love about the series so I was starting to worry that maybe Dresden was changing and I wasn't going to like the series as much in these newer books. The ending of this one was really good and it helped pull me right back into the series. There is one thing that I hope works itself out because I was getting irritated by it. Harry spends a few scenes talking to people that are not really there. People that have been dead are talking to him and he is either hallucinating and going crazy, or he is so powerful as a wizard that he is pulling these spirits to him and he is actually talking to the dead. In an earlier book he fell sleep and had a conversation with subconscious Harry and he does that again in this book. For some reason this doesn't bother me as when he talks to a certain character who has been dead longer than the series has gone on. I guess I either want answers or for Harry to stop going mentally unstable.

I really liked this book. I can't wait to see what comes next in this series but I don't want to catch up, It is nice knowing I have quiet a few books ahead of me and when that is gone I'm not sure I will be able to wait for the next book. This is a 4 out of 5 star book. More like a 4.5 star book but I can't do half stars on other review sites.
Sci-Fi