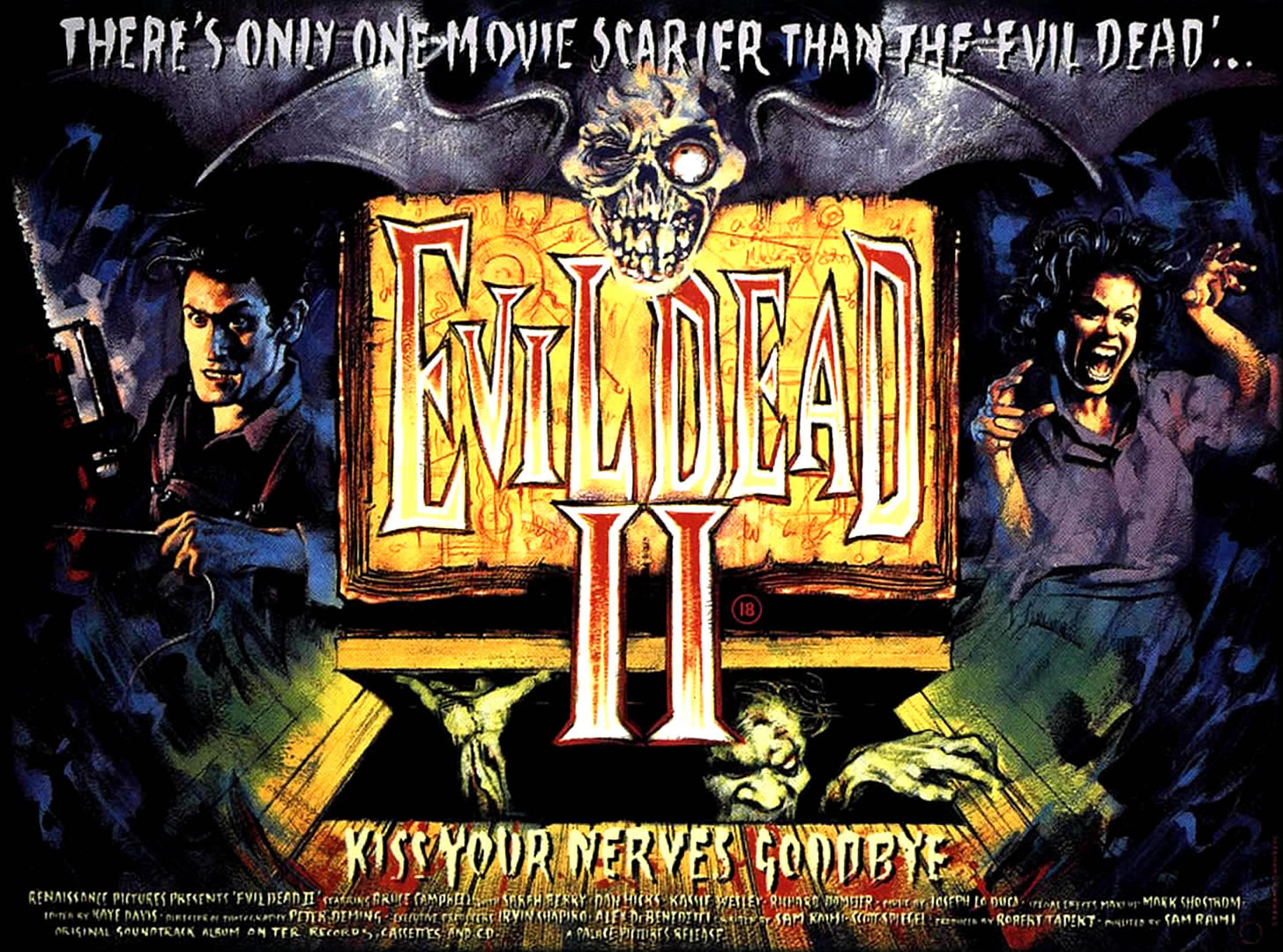 Happy Halloween and welcome to the last movie review of the week. Hope everyone has had fun so far and those that celebrate Halloween have a great night.This is my favorite horror movie of all time.It is super cheesy and you can see the strings for the things that fly but I love this. if you watch in some of the scenes you can actually see that the ceiling of the cabin is missing but the story is good and the one liners are even better. "Groovy!"

So here is the story behind the movie. A normal guy decides to take his girl friend to a secluded cabin to well, spend some alone time together. when he gets there he finds this book bound in human flesh and inked in blood next to a recording. Who wouldn't be curious to see what was on the recording. The voice on the tape begins to read the translations and it wakes the evil  and it takes his girl friend. our main character is named Ash and he is played by the king of bad horror Bruce Campbell. The rest of the movie is him trying to survive the night. Everything that could go wrong does for Ash and he is not only try ing to survive but also trying to stay sane.

Evil Dead 2 is less of a sequel to Evil Dead and more of a reboot. This movie redoes the whole story from the first one with different characters and honestly a better story line. the one thing that is so separates this movie from the first one is that Ash is a stronger character, The evil tries to take him over and only succeeds in taking over his hand. Ash cuts it off with a chainsaw and then fabricates the chainsaw to fit over his stump.One hand is a chainsaw and the other wields a sawed off shot gun. What better character could take on the deadites and save the world.


The special effects are cheesy and it is funny to see how far Greg Nicotero has come since he is now doing the effects for The Walking Dead. The tag line for this movie was the Gorier the merrier so you can expect gallons and gallons of fake blood in this one. The Book of the Dead is really detailed and so is the dagger that is with the book but we honestly don't get much explanation about the dagger.

This has a huge cult following and I'm apart of it. I have two copies of these movies on dvd. One regular edition and a collectors edition. If my wife would let me I would buy these on iTunes so I have a digital HD version that I could watch  anywhere on my iPhone. Flash forward to today and the new series, Ash vs the Evil Dead airs on Starz. I am super excited to be able to continue Ash's story. The first series premieres tonight on the best night possible, Halloween. the new show picks up right where Army of Darkness left off just 30 years later. The remake of Evil Dead was amazing but this is what the fans have been waiting for. We finally get more Bruce Campbell as Ash. you can believe I will review the first season  as soon as I can watch it. I don't have Starz and usually Starz shows don't hit iTunes until after the season is over. As soon as I can my review will be up so look for it. Watch the trailer for this movie above and then check out the trailer for the new series airing tonight and hopefully you will understand why I love this series so much and this is a 5 out of 5 star movie.

This is my very last post for the R.I.P Challenge Peril of the Screen section. I'm so sad to be at the end of this challenge. Now I get to start planning my Halloween week for next year. Check back Monday for my Halloween Week/R.I.P Challenge wrap up. Hope to see you all checking out my blog through out the year and come back for the 4th annual Halloween week in 216.