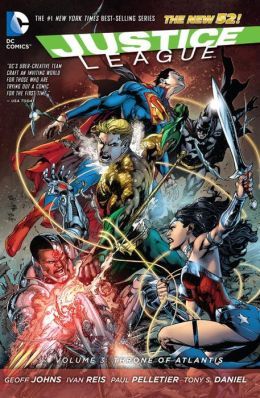 For the most part this book is the same as Aquaman Vol 3 but there are several issues from the Justice League series that were enjoyable to read. The parts of this that are just Justice League and not part of the Throne of Atlantis story seem to be setting up a bigger story. The beginning of the book is all about Wonder Woman and her lack of trusting others. She is chasing the Cheetah and has to open up and let the rest of the Justice League help her for a change. There is also a small section with Steve Trevor that seems there is more coming that might not be good for the League.

So what the book is all about is the war between the people of Atlantis and our world. On top of that the current King of Atlantis is Arthur's brother. He stepped down as the King of Atlantis so he could be prat of the League and remain in our world where he grew up. Trying to decide which side he is going to help is a difficult choice for him. It's this choice that leads to some tension between the other members of the League and Arthur. Surprisingly Batman is the only one who seems to be on his side.

The writing is great because Geoff Johns is also the one writing Justice League and Aquaman which means the story is seamless between the two. It makes reading this really easy and enjoyable. Even though this is a crossover of two series it is one story. Sometimes there can be a disconnect in these collections because there are several authors trying to mesh several styles into one. On top of that I have mentioned several times but I will at least once more. Ivan Reis is a great artist and I love the books he is on.

I liked this book but the Aquaman one I thought was better. Don't get me wrong I am really curious to see where this story is going. I am giving this 4 out of 5 stars.