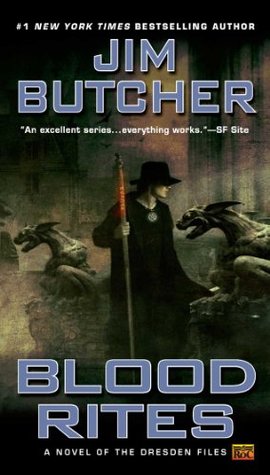 I love this series and I am finally into the books I haven't read already. I wanted to re-read the first 5 books so I could remember what all lead up to this book. I was so excited to see where the story was going to go with the war between the red Court and the White Council continuing. Based on the title I figured this was going to be about the vampires and I was excited to start this one.

Compared to the last two books I wasn't as impressed with this book. The plot is less convoluted in this book. Instead of 10 different story lines that all tie into one at the end we only really had 2. In this book the Black court of Vampires is causing problems and Harry decides he is going to hunt them down and kill them all Bram Stoker Style (Wooden stakes, Garlic, and beheading). He is also asked by his White court vampire friend Thomas to protect a friend of his who seems to have the people around him dying.

I was really excited to see Harry rip through a nest of these disfigured horribly terrifying Vampires. The curse that is killing the people around Thomas's friend was also a nasty piece of work so they book had some real potential. For most of this book I just felt it was ok. Nothing overly impressive like what was in Book 4 and 5 but it had its moments. There was some great revelations about Harry's Mother which I loved learning about and the very last quarter of the book really picked up and held my attention better than the rest of it.

Every series has the potential to have a weaker installment, what matters is that the weaker book doesn't begin a trend. Even though I felt this was a weak story line I didn't think this was a bad book. There are a ton of great Harry Dresden one liners that were hilarious, and learning more about Harry's past was great. I can only hope that there is more to learn about Harry and his mother. I also really like the character of Thomas so I hope to see him in future books as well. Overall I give this book 3 out of 5 stars. This was enjoyable and I can't wait to get to the next book and see what trouble Harry gets himself in next.