The Flash Vol 6: Out of Time by Robert Venditti 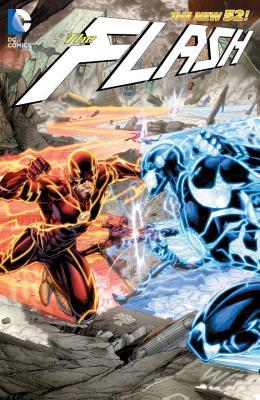 So do any of you remember when Superman became a being of energy and became Blue? Then something happened (it has been a long time since I read this) and he split into a Red energy Superman and Blue Energy Superman. Well DC has done it again and there are Two Flashes, one Red which is the Flash of our time in the present, and a Blue one from the future. I have to admit I have no idea why Barry is charged with Blue lightening in the future. I either glanced over this tiny detail or it really wasn't explained in the book. I even went back and re-read sections to see if I missed it and couldn't find anything which is a slight pet peeve of mine. We do learn that the Speed Force has been damaged and is tearing apart. Future Barry does mention that he has done some upgrades to the suit but no actual answer as to the Blue energy. If I missed this and you have read this and know the answer please let me know in the comments. 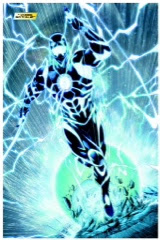 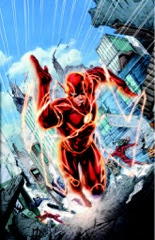 Blue Flash is doing what he can to repair the speed force so he is jumping back in time to different events to correct them because he wasn't fast enough to make things right when they happened the first time. I have to admit the artwork is pretty good in this book. Both Flashes look really cool.

I have to say that these suits are much better than the Superman ones. I don't know if it is the lightening or just more detail tot he characters but these two win best Red/Blue suit.

I must admit something to you. I had a hard time keeping up with this story at first. This bounces around between the future and the present so often that I would get lost as to which part of the story I was reading. I know, you are probably thinking that it should be easy. The color of the Flash will let you know. It still takes some getting used to. I also was really lost as to when this book picks up at first. I remember reading Vol 4 and that was about the Reverse Flash. This book picks up after a huge event that has left the city in ruins and the citizens scrambling to pick up the pieces. For those of you who aren't always up on the events of the DC Universe, this takes place right after the events of Forever Evil. The Crime syndicate has just battled the Justice League and this is the aftermath. 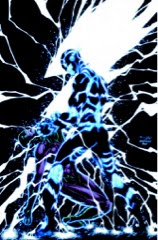 The art work in this book was really good and detailed so I was very pleased with that aspect of of the book. The story was pretty good but it felt disjointed and off at times. It did take some time to get into it, but once I did I flew through this. I am very anxious to see what happens next in the Flash's story line because I want to know what was going on with Blue Flash and I hope there is more to this in future books. Finally, what multi Flash story would be complete without a battle to the death between our duplicate heroes.

I am happy to say that I liked this book and not only do I want to see what happens next for the Scarlet Speedster but I want to go back and read those first few books that I have missed. I give this a solid 4 out of 5 stars. I have read better books but this series is getting better with each one I read. Scott Snyder's run on Batman has been amazing and I haven't found anything recently as good so it is tough to impress me.
Graphic Novel