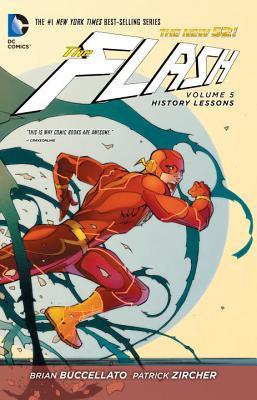 I really liked this book. I haven't read much of the Flash since New 52 began but I haven't heard great things about the first couple of volumes. Soon I will get around to catching up. My first volume since New 52 was #4 Reverse. This was a collection of three different stories. The first two take up a single issue but the third story has multiple parts.

I'm a sucker for a good superhero team up and who better to start this book with Barry Allen that Hal Jordan. The Flash and Green Lantern have been friends for a long time so it was great to see them teamed up in this first story. Barry even gets to wear the ring for a moment to see just how much effort it takes to be a Green Lantern. This story draws on when Hal and Barry met for the first time which was fun to read. The second story is just Barry and an event that happened years ago coming full circle. The rest of the book revolves around a serial killer who might have been responsible for Barry's mother's murder.

This third section also involved a superhero team up with one of DC's lesser known heroes. Deadman is the ghost of a famous Daredevil who died during one of his stunts. He helps out in all kinds of books. In this book our serial killer is the spirit of a very bitter man who had his best friend take everything from him. Barry needs the help of Deadman to try and keep this spirit at bay. The Flash was a series I read regularly before New 52 began but not one of my long time reads. For my fellow comic book nerds I picked up reading the Flash around the time of Infinite Crisis and The Flash Rebirth which was one of the best comic stories I have ever read. For everyone else I started reading the Flash around 10 years ago. I don't remember there being anything about Barry's mom being murdered. The television show, which is awesome, has this same situation. I kind of like that the two sort of match with this underlying plot. The ending really leaves me anxious to find out more. Thankfully I have the next volume already thanks to DC Comics.

So for the rating. I give this 4.5 stars but will round down to 4. The art work isn't bad but I have seen better. Had the art work been a little better it would have pushed to 5 stars. I am very anxious to move on to the next volume and hope it is as well written as this book was. It was fun to have the different stories in this volume.
Graphic Novel