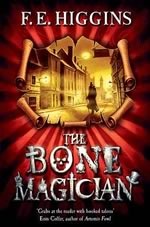 Before I read this book I judged a book by its cover. I decided to give The Black Book of Secrets a try. I liked that one a lot and was excited to see it was part of a series. I was a little less excited when I found out the next book doesn't have the same characters but involves the city which book one took place. I liked the description of this book so figured I would keep going. I was a little let down.

This book is about Pin who is a young man out on his own. His mother is dead and his father is missing because he is suspected of murder.Pin takes a job as body watcher with the local undertaker. Body watcher is a job that is exactly like it sounds. Pin has to watch the bodies for three days to make sure they are good and dead before they are buried because they have to often thought someone was dead and buried them only to find they were in  fact alive. Now this is set in times before modern medicine had advanced. Their idea of seeing if someone was dead was to hold a mirror under their nose to see if it picked up steam. One night he is knocked on the head and watches as a group of people bring the corpse he is watching back to life so her husband can say his good byes.

Sounds interesting right, well it took forever to get going which isn't a good thing considering how short this book is. I found myself bored and my mind drifting through most of this book.  It didn't really get better at the end. The big reveal was kind of a let down. I think this is the end of my reading of this series.

Well, it wont come as a surprise that my rating is rather low. I give this 2 out of 5 stars. Not saying this is a bad book but I just didn't care for it. The summary sounded like it was going to be very interesting it just struggled to get going.
YA Fiction