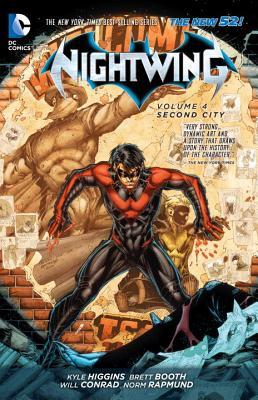 I am fully caught up on Nightwing now and still in the dark for what I wanted to know. So quick explanation, I have heard of a big event in the Nightwing story well before I read it. I have a cousin who is a huge comic book nerd like myself but he keeps up on all the stories. He spoiled it for me and I'm ok with it, we always have something to talk about a family gatherings and I don't feel so out of the loop. Anyway, I have been waiting to read how all of this stuff happens and since I have already read Vol 5 I figured it had to be in this book. I was wrong, the one thing I hate about DC's stories is that they happen in a ton of different series and books and you don't always know which ones. I did a search and found that this big event happens in Forever Evil Vol 1 in case anyone is wanting to find out what I am cryptically talking about here. Guess I will be checking my library for that book and the review should be up here shortly.

Now for the book itself. For anyone who has read the Batman books or watched the Cartoon series from the 90's you know the name Tony Zucco. Zucco is the man who murdered Dick's parents all those years ago when he was a child. He was thought to be dead for years until an email sent to his daughter proves he is still alive and living in Chicago. Dick makes a move with practically no money and a bug of closed and one suit to find Zucco and bring him to justice. He could have plenty of money if he would just ask Bruce, but events in Batman's wold have driven a wedge between the members of the Bat Family.

This is a great story because it touches on Dick's history and it hits very close to his heart. He wants nothing more than to see Zucco back in prison for his crimes but he also needs to do what he can to save this new city from a villain who is terrorizing them. There is a lot to this story that keeps it interesting throughout with not a lot of dialog to move the story forward. The reason that there wasn't a lot of dialogue needed was because the art work in this book was really good. I have been really impressed with Brett Booth's work on the Nightiwng books. He does an excellent job of setting aa scene and drawing those action sequences. They are so detailed and clean that if you were to sit and taking in the whole page there would be a lot to notice. I have read some comics where the artist only focuses on the character and the background seems to be flat and unimportant, I have also read books that rely on shadows and appendages to block character faces just so they don't have to draw them. Not Brett Booth, every aspect of each panel is important and they look like comics renderings of actual photos. He has done some of the art work For Teen Titans as well and I was impressed with his work on those books that I have read too.

I really liked this book but since I read this right after Vol 3: Death of the Family, I just didn't love this one as much as I did the other. I give this book 4 out of 5 stars, I am kind of sorry that I have caught up on the Nightwing series because I already miss having these ahead of me to read. I love this character and next to Batman, Nightwing has always been my second favorite hero. Depending on the stories Superman, Green Lantern, and the Flash would fight for that third spot but Batman and Nightwing have always been the first 2. I also love how for the most part the Batman books haven't had huge changes in the mythos since New 52 began and I really like that, Some of the series have had some drastic changes and I didn't like those changes.
Graphic Novel