The Fall By Guillermo Del Toro 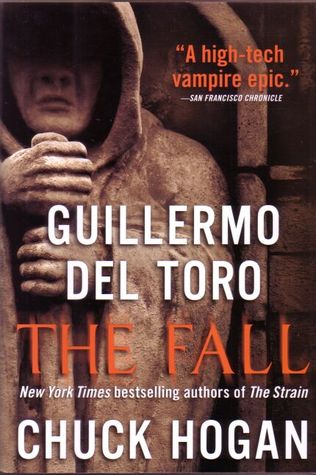 The Show the Strain was really good this first season. It renewed my interest in this trilogy. The first book wasn't as good as the television series in my opinion but I wanted to see where the story was going. This is definitely a middle book. Nothing really happens in this book until the very end and it really feels like that was just setting up the final chapter in this story.

So here comes the warning. I am going to mention some things that happened at the very end of the last book/show so if you don't wan't SPOILERS then I would stop here. If you have seen the show or read the first book you will be fine. If you don't care to read these and are curious to find out what O have to say then keep reading. I'd love the company.

This book picks up right where the last leaves off. The Master has escaped and looks like an over cooked turkey. The sun may have burned him but it didn't kill him like it does the underlings. The Vampires have begun to out number the humans on this planet and our little group of survivors are taking the fight to them.

If you were to draw a graph of the plot of a book it would look similar to a mountain, at least that is what my English teachers used to tell me in school. The story starts off building to a point or climax and then turns and heads down to the conclusion. Realizing this is a trilogy I still felt like this story line was nothing more than a straight line. The very end picks up a little which I had hoped would set the final book up for one hell of a climax. I got to the end and could only think to myself "Really? You are going to go that route?". Out of all the ways this book could have ended I feel like this ending was cheesy and underwhelming.

All of this aside there were some decent moments in the story so I will still give this 3 out of 5 stars. I would say I have high hopes for the final book but my excitement is faltering. I hope the show does a better job with season two but I will wait and see.