The Walking Dead Vol 16: A Larger World by Robert Kirkman 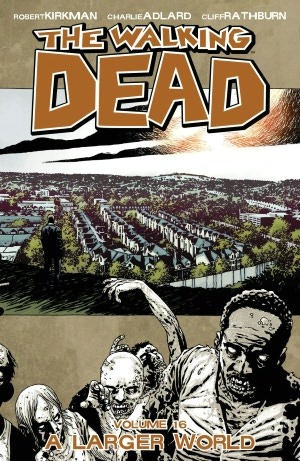 Well her we are with the next chapter in the story. Was it impressive, meh. In this book Rick is trying to strengthen their community. Keep things safe and secure and I felt this books exactly that. It's a safe bet that people will read this because it is part of the series, and the publisher is secure knowing that even though this is a slow plain book they will make tons of money because it says "The Walking Dead".

I'm being to harsh, this does set up what I hope is a very intense story line in future books. In this book Rick finds out that there are in fact other communities out there. It shouldn't have been such a shock because it just makes sense. It hopefully will open up trade between our group and these others which will bring in some much needed supplies.

We get some new characters introduced and with a new community of people it opens up for some new conflicts that our group hasn't had to deal with. I wasn't a big fan of this book. It just dragged on for me until the end. The new community has brought possibility to where this series can go and I am anxious to see what happens next. I just could have done without this book. If the last half of this book was the beginning of this volume it would have been more interesting if that makes sense. I give this 2 out of 5 stars

This is also going to be my first entry into the Readers Imbibing Peril event. I am doing Peril in the first which means I will read four books from the supernatural, Mystery, or horror genre. 1 down, 3 more to go