The Last Apprentice: Night of the Soul Stealer by Joseph Delaney 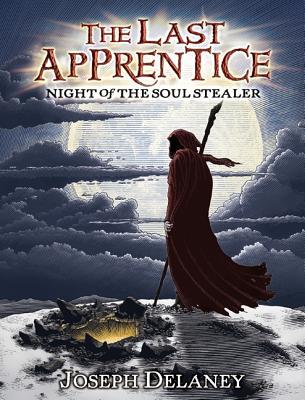 Night of the Soul Stealer

Questions answered and Secrets revealed; well sort of. There has been very little said about the Spook in the first two books, but in this one we finally get some answers to the questions that have been on my mind since the very begining. I really liked this book, mostly for these glimpses into the Spook’s past. The plot isn’t really strong but being able to get some answers to some of my questions was worth the read.
In this book we don’t have just one plot line, but two. A mysterious man shows up at the Spooks residence demanding the Spook return what he stole or else. Dark Magic circles this man and Tom wonders if he is another Spook or something more sinister. The second plot line is about what lies in the basement of the Spook’s winter home. When I say winter home I'm sure your first instinct is to think beach house, but that is not the case. This home is colder, and darker than the one he lives in the rest of the year, but with the winter comes dangers that Tom and the Spook will need to face.
The main plot line with the mysterious stranger was only ok I thought. I wish more would have happened a little faster, but the ending of that plot line seemed so abrupt I had to go back and re-read it. I wanted more to how it ended, and wish that things could have almost carried over into another book. There was a lot of potential for a larger story with more action, but it seems Mr. Delaney wanted to move on. I’m still looking forward to reading what he has in store in the rest of the books.
The second plot line deals with the witches that are imprisoned in the Spook’s basement. We get to learn more about the different types of witches and more on why the Spook warns Tom to stay away from girls with pointy shoes. This was what I enjoyed most about the book. We get a glimpse into the Spook’s past with failed apprentices and lost love.  Usually the relationship stuff I glaze over but this was interesting.
I can't say it enough, I'm really enjoying this series and looking forward to moving on to the next book. This deserves another 4 out of 5 stars. If you are a fan of supernatural stories, and ghosts and other evils then this is a fun series to read. I highly recommend these.