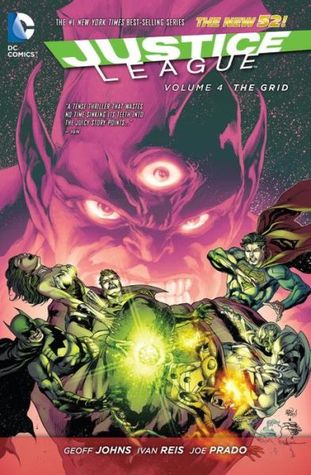 I can’t believe I am going to say this. I am not a fan of the direction the New 52 Justice League is going. To make matters worse the story line is being written by one of the best comic book writers out there. I have praised the writing of Geoff Johns countless times. I know when the Justice League has gone through reboots in the past there is always bumpy roads as the heroes learn to work as a team. I expect that in Volume 1, but even in Volume 4 there still seems to be trust issues, and awkwardness. I’m also not a fan of the personality of Superman and Wonder Woman. Wonder Woman is a diehard warrior that would rather solve a dispute with her fists and talk later, and Superman almost seems disconnected from the people of Earth. Wonder Woman has always been a strong Amazonian warrior, but she used to have empathy and cared about people. Superman has a loner sort of demeanor like Batman tends to and it just doesn't fit with the classic Superman persona. Maybe I’m wrong, I haven’t read any of the New 52 Superman yet so I have only been exposed to this version.
I skipped over Vol 3 because I am a little behind on Auquaman and didn’t want to spoil the War with Atlantis. While I was reading this I kept thinking how disjointed the whole book was. I feel better having read other reviews that have said there are parts of other books, that I haven’t read, woven into this collection. I'm getting really irritated by plot holes in these graphic novels, and DC expecting us to have read every single book they publish.

This story begins with tryouts for new members; I don’t know how I feel about this. The Justice league has always been the best of the best in the DC Universe, and this seems like they are trying to strengthen their B and C characters. I get what DC is doing, they want to draw readers to their lesser performing series and that has worked for me in the past I never would have read Hawkman if it wasn't for Blackest Night. I just felt that in this book, the tryouts took away from the story.
Then we get a little taste of Shazam’s series as (I think) one issue from Shazam gets thrown into this collection, and then we finally get to the beginning of what is supposed to tie in all of the stories that have happened in the DC Universe. I could have gone without half of this book and still gotten the same thing out of it. It pains me to give this book a less than favorable review but I wasn’t a fan. I can only hope that the big plan for the future of the Justice League becomes apparent soon.
One of the things I can say I enjoyed about this book was the art work. There are quite a few full two page action sequences that were really impressive. This aspect kind of sucks if you have the digital ARC (Thank you DC Comics) because you only get half of the picture at a time. Reading on my iPad I only get a page at a time so I don’t get to enjoy the whole scene. This is a prime example, great artwork, but there is more to this picture on the other half. Still, I think this shows how detailed the artwork was in this book pretty well. 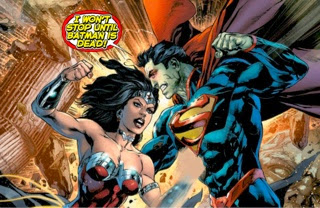 When thinking about what I was going to rate this book I thought for a long time before writing this post. I am only able to give this 2 out of 5 stars. I liked the art work and at the very end there was some potential to the story if it can stop bouncing around so much. I’m curious to see where volume 5 takes this, but otherwise I was a little disappointed in this book. Here is hoping Johns will bring all of this together and save the story line.
Graphic Novel