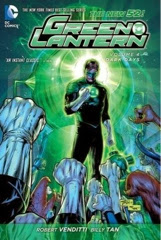 For years I have been a huge fan of Green Lantern and the Corps. These series have had some of the best story lines, and battles I have seen in a comic book. When Geoff Johns took over the writing on the Green Lantern series I was thrilled. He quickly became one of my favorite Comic book authors and I read every book I could get my hands on no matter who was the hero. I have followed his amazing story lines with Green Lantern until his term ended. Now the reins have been passed and Robert Venditti took over the future of Hal Jordan. I was nervous at first because I have never read his stuff and I knew I would constantly compare him to the genius of Geoff Johns. On top of that, the previous story lines for GL have been so strong I was afraid this was going to derail the whole thing. 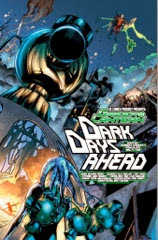 I was pleasantly surprised. I liked this story and there was a lot of hard decisions that Hal Jordan had to make. There was more emotional depth to Hal's character in this book and I enjoyed that. Hal has been made the Leader of the Green Lantern Corps while the new Guardians are off tending to some secret mission of their own. For anyone who has ever read these books knows that Hal is not a leader or a team player. He does his own thing and doesn’t care who he runs over in the process. It was interesting to see Hal grow as a character and fit into that roll of leader throughout the story.  This starts off with a glimpse into the future and the central power battery has been put out. A being known as Relic has found his way to our universe and his goal is to find the source of the emotional spectrum and refill it since his universe was lost when the source dried up. 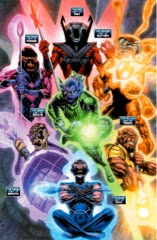 The creation story told by Relic states that, at least in his universe, The different colors of the emotional spectrum were harnessed by a single being for each color. These were called Lightsmiths and they controlled emotions similar to those held by the different corps of our universe. They wielded their energy through a weapon they held instead of a ring. This story tells us that the energy that the rings wield is not as limitless as we thought. There is an end to the amount of energy and it seems that that end is dangerously near.
I liked this quite a bit but there are a few things that I am not particularly happy with how they do the collected Graphic novels. The biggest problem I have is the fact that there are so many Green lantern titles that you miss big portions of the story. If all you read if this volume you will be missing out on a lot of, what I feel is important information. There are big holes and this book was the worst offender. I won’t get into details but at one point there is a shocking reveal and I had to re-read to make sure I missed something. The story goes along fine and then there is whole events missing that we are just supposed to know about. I will read the other titles as well but with the giant gaps in this plot because it switches from one series to the next and then back again I was a little lost. To add to that since it switches back and forth I now have spoiled this event when it happens in the other series because I already know what happens next. Years ago DC had said that they wanted to stray away from the big crossover events and Infinite crisis was going to be the last that encompassed all of the DC heroes. It seems they have held true to not making big stories with all the DC Universe but they still do big stories in each individual character line. Batman has story lines that are pieced together through all of the BatFamily books and Green Lantern has a bunch of series that piece together a greater story. If I was still buying monthly comics of all of them this wouldn’t be an issue but now I am sticking with Graphic novels so I tend to miss out on things.

Now that I have ranted about what irked me about this I must say again that I liked this book. I do need and want to fill those gaps this book creates in the story. I plan to as soon as I can, I will be on the waitlist at the library soon. The art work was really good as well and I enjoyed every bit of it. I will give this book 3.5 out of 5 stars, rounded to 4.