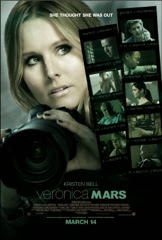 Veronica Mars
“A long time ago, we used to be friends but I, haven’t thought of you lately at all.” That opening song has brought back so many memories, and I must ask that you please forgive me. I am about to really let my inner nerd out on this post. I remember when Veronica Mars first started. I wasn’t a big fan at first, but there was something about that sarcastic teen detective that grew on me. My wife and I watched the first season, but because we worked so much in the evenings we missed most of season 2, no DVRs back then. Season 2 came out to DVD and I bought it right away. We happened to have the weekend off, and we watched the whole season. Big fans from the start, we were crushed when the show got canceled.
There was talk of a spinoff show with Veronica as an FBI agent, and I think there was a trailer, but nothing ever came of it. Then I read an article on engadget.com a while back that said there was a Kickstarter campaign to get a Veronica Mars movie made.  I really had mixed emotions about this. I was so excited to see all the old characters back, but it has been seven years since it was canceled, and I was afraid it just wouldn't be the same. The more I read about this movie and then watching the trailer I got goose bumps.

I have to thank the people at Apple and Warner Brothers. Because of them I was able to preorder this and watch it at home the day it was released in theaters. When I saw this browsing iTunes I didn't think. I just bought it. I can’t tell you how excited we were to be able to watch it on our Apple TV from the comfort of our new couch, in our comfy sleep wear for less than what it would have cost to see it in theaters. I didn't have to spend gas money to get to and from the theater. The movie was less than what two tickets to the movies is these days, and we had our own food. On top of that I had the ability to pause if I had to run to the bathroom. When we go to the movies I always get the large combo because of the free popcorn and soda refills, and it never fails, a big scene begins, and I just can’t hold it any longer, and I have to rush off to the restroom missing what happens next.
Watching this brought back those old memories of watching the show with my wife when it aired snuggled up on the couch. We loved this movie!!! The movie premise is not surprisingly like the first season. Yet again Logan Echolls, Veronica’s ex-boyfriend, is being accused of murdering his girlfriend. Veronica is all grown up and has escaped the pull of her home town. Living in New York, she has set aside her PI days and is trying to work for a very big prestigious law firm. She has a promising future ahead of her until she gets that call from Logan desperately begging for help. Of course she drops everything to rush home to try and solve the mystery around her old classmates.
This was a great movie for any fan of the show. It was so much fun to see every one of the characters from the show. There were a lot of actors that we didn't even remember being in the show until we looked them up on IMDB. This was such a wonderful trip down memory lane that I already can’t wait to watch this movie again. Thankfully I own it. If you were ever a fan of this show I will encourage you to go see this movie.

I've decided I really should rate movies like I do books so for this movie, the more I think about it the more I love the trip down memory lane. I am going to give this 4.5 out of 5 stars. There were a few slower spots which kept this from getting a full 5, but I did love this movie.
Movies