Teen Titans Vol 3: Death of the Family by Scott Lobdell 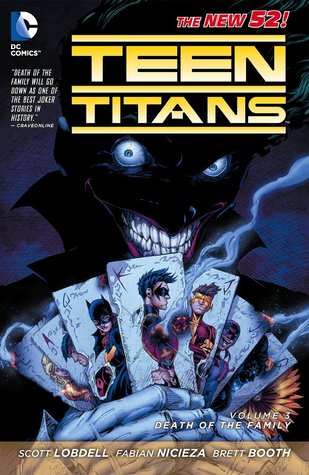 I was fortunate enough to win this book through a Goodreads giveaway. I was so excited because I love the Death of the Family storyline in the Batman comics. I was really looking forward to seeing this side of the story. I hate to say it, but I was kind of let down.

I love the Death of the Family story line because the Joker is back and crazier than ever. He is on a mission to kill all of the different members of the Bat family like Red Robin, Nightwing, and Batgirl. Joker feels like they make Batman weak, and he wants the old, darker Batman back. It was more fun then.

This book opens up with Batman telling sort of an origin story of how Tim Drake became Robin. This I really liked because it told the story from Batman's point of view, and I really enjoyed this part. Once the origin story passes we see the Teen Titans on the hunt for Red Robin in Gotham city. They also ask for the help of Batgirl to find him.  The Titans story line was just ok. There was some adventure to their hunt but nothing really gets resolved. It just sort of ends once the book shifts to the ending of the Death of the Family story that I had already read in the Batman Vol 3. The last issues in this collection is all set up for the next story line in the Teen Titans story.

I am curious to see what is next for the Titans after this little tease, but I was really not satisfied with how their part of the bigger story was handled. I guess I was expecting so much more after reading the main title graphic novel Batman Vol. 3. The artwork was pretty good, and I did really enjoy that. The parts of this book that dealt with mainly Red Robin I enjoyed, but the rest fell flat.

Because of the parts I did enjoy I will give this 3 out of 5 stars. Really this is almost a 2.5 star book, but I really do love the Death of the Family story, and I was more than happy to read the ending of it again. That is why I am giving this 3 stars. It's not the strongest book in the story line, but I am glad I read it.
Graphic Novel