Aquaman Vol 2: The Others 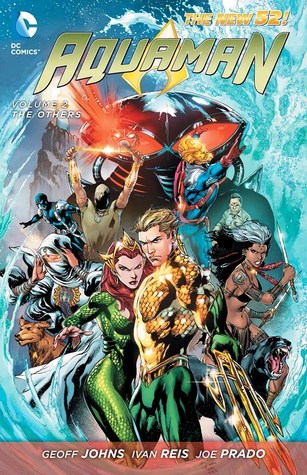 Aquaman Vol 2: The Others

I have been very impressed with the reboot of Aquaman. Geoff Johns has made him less of a joke and more of a hero that can hold his own with the Justice League. That being said, I have to admit that I was a little disappointed in this particular book. The gripes I have are just minor, but I was hoping to get more in depth with the Atlantean artifacts.

In Auquaman Vol 1: The Trench, Aquaman finds a relic from Atlantis, and we know very little about it. I was hoping to get more info on these relics and continue the story that I loved in book one. There is some story about the relics, but for the most part this is about Aquaman Vs Black Manta. Not that this was a bad story at all, but I expected something else with how Volume 1 ended.

This story is about the Others. This team is kind of like a third string Justice League. They have been looking for relics from Atlantis to protect them. Aquaman joined with them early on in his career when he was brought into the public eye. We get to see a side of Aquaman that is dark and edgy in this book. He is so driven by hate and revenge that all he cares about is killing Black Manta. Aside from the killing part, Aquaman is kind of portrayed like the Batman of the ocean.

We get a little bit of origin story in this book which I did like. We get to see Aquaman as a boy with his father and what sparked the hatred between Black Manta and Aquaman. I do like a good origin story, and it seems like Johns is adding depth to this character, and I like where he is headed.

This was a pretty good book. I was just expecting something else. As always, the writing from Johns was very well done, and Ivan Reis is an amazing artist. I really like the art work he did for this book. Overall I would give this four out of five stars. It was not my favorite but a good read anyway. I am looking forward to the third volume because I am hopeful we get into the mystery of Atlantis more.