Normally I am strictly a DC Comics guy, but I am a big fan of the show Castle. These graphic novels are based off of the books Richard Castle wrote about Derrick Storm. This graphic novel follows right after the events in Deadly Storm. Derrick Storm is still a private detective, but now he is also a spy working for the CIA. After recently loosing his first CIA handler, he is trying to throw himself into his work. Helping a wealthy heiress get back the money she was conned out of, Storm comes across an African Freedom fighter.

The Freedom fighter tracks Storm down and begs him to find his sister who is trapped in a human traffic ring. I thought this was a great plot especially for a comic book. There is quite a bit of action in this book, and the artwork is really well done. Like any spy novel there are gun fights, chases and beautiful women. One in particular make Storm think he has seen a ghost.

This is the second graphic novel in the Derrick Storm series, and I think they are a lot of fun. If you are a fan of the show but not a fan of comics, I would recommend this. It is a lot of fun as a fan to read these stories that we hear about on the show. The fact it is in a comic makes it even better for me. If you are fan of comics and not the show, I would still recommend this. The story is interesting and the artwork is well done. This is definitely worth the read.

I had to add this to my post. I have said that the publisher treats Richard Castle like a real flesh and blood author when he is really a fictional character. At the end of this book there is actually an 'About the Author' page all about Richard Castle, picture and all. 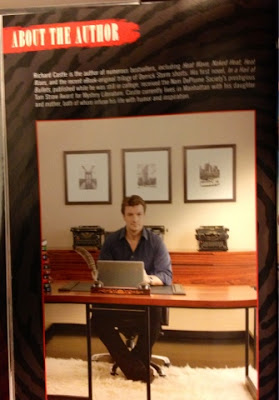 This is what makes the Richard Castle books fun. The picture isn't great, but that is Nathan Fillion, who plays Richard Castle on the show. His office in the show is much more impressive.

I decided to give this book a solid 4 out of 5 stars, I really did enjoy the story and the artwork quite a bit.