Geoff Johns is an amazing writer, and his comic story lines are some of the best I have ever read. I can honestly say he is a genius, because he did what I never thought possible; he made Aquaman cool. This is the beginning of the New 52 reboot of Aquaman, and it starts out poking fun at him. Everyone thinks Aquaman is lame because all he can do is breath underwater and control sea life. He is practically useless on land, or is he? Geoff Johns shows a tougher side to Aquaman. Even though he has been the butt of everyone's jokes, he is a hero to be reckoned with. 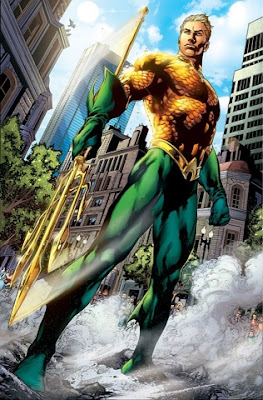 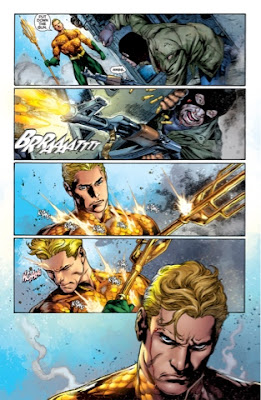 These pages from the book show just how badass Aquaman is in this new reboot. The trident and armor he wears is strong enough to bounce bullets right off. It is very Superman like, and it made for some amazing visuals. Who knew I would be this excited about an Aquaman book?

Speaking of amazing visuals, Ivan Reis and Joe Prado are amazing together on this book. They created such strong images that they told the story just as much as the amazing writing. The level of detail was impressive, and the colors really stood out. The best picture I could find to demonstrate this is a collage of several images, but the creatures in the book had bioluminescence, and it was really cool. 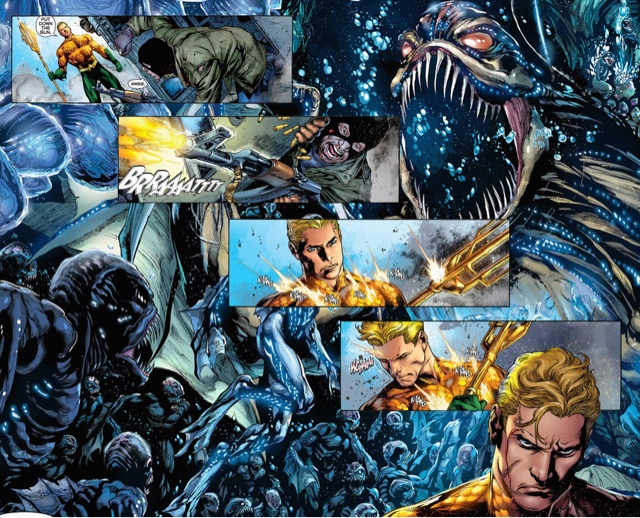 This story is really interesting. It starts out with a new species of undersea creature coming to the surface to find food. As Aquaman tracks them down he comes across an old Atlantean ship crashed deep in an undersea trench. This leads to a piece of a much larger puzzle that could lead to answers about the city of Atlantis itself. I really liked this book, and I didn't expect to. I have been trying to read as many of the New 52 reboots as I can, and this just happened to be at my library. As soon as I finished this I went right onto my library's web site and put a reserve in for book 2 and the third that has yet to be released. This book definitely deserves a full five star rating in my book. It also made my favorites shelf on Goodreads. It is nice to finally see Aquaman portrayed as a hero that could keep up with Batman and Superman. After this book I can say that Aquaman has earned his place in the Justice League.
Graphic Novel