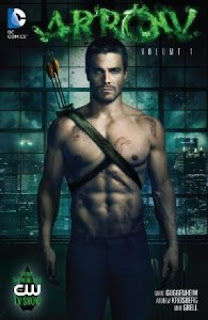 DC comics and the CW have collaborated to put out a new comic book show based on the Green Arrow. This show is very different from the Green Arrow story I know and grew up with. There are similarities, but in the comics (at least before the New 52) Oliver Queen has no family when he returns from the island. He is completly alone which allows him some freedom to become the Green Arrow. He isn't tiptoeing around family to try to hide his secret. This book was put together as a direct tie into the show. It is meant to fill in a few gaps and continue Green Arrow's quest.

There are some great things about this book for fans of the show, but as a graphic novel it can't stand alone. If you are a fan of comics, or of the Green Arrow, I wouldn't recommend this if you haven't seen the show. You need to know what is going on to really understand the events of this book. The show of course lays the ground work so the writer didn't need to waste time on back story. I have to admit that even being a fan of the show I felt a little lost at the begining until I got used to the way the book is written.

The things that I really liked about this book are the little back stories that are like flashbacks every so often. Now I know I said the writer didn't need to waste time on backstory. What I mean by that is this book follows along just as if it was an episode of the show. Another name is crossed off Green Arrow's list, and the main story keeps going. In between these chapters we get to see more of Huntress and her husband and how Laurel became a lawyer. These little glimpses into the past help fill in character gaps that haven't been elaborated on in the show. The artwork is pretty good, but I have seen better. However, the action sequences are cool, and even in the ones that don't have much, or any dialog, the artwork tells the story very well.

I liked this and was so glad that DC Comics let me read this for an honest review through Net Galley. I like the tie in graphic novels because they tend to add to the whole experience. The same goes with graphic novels based off of movies. Even though those are just retellings of movies I have already seen, I like to see the artist and writer's take on it.
Graphic Novel